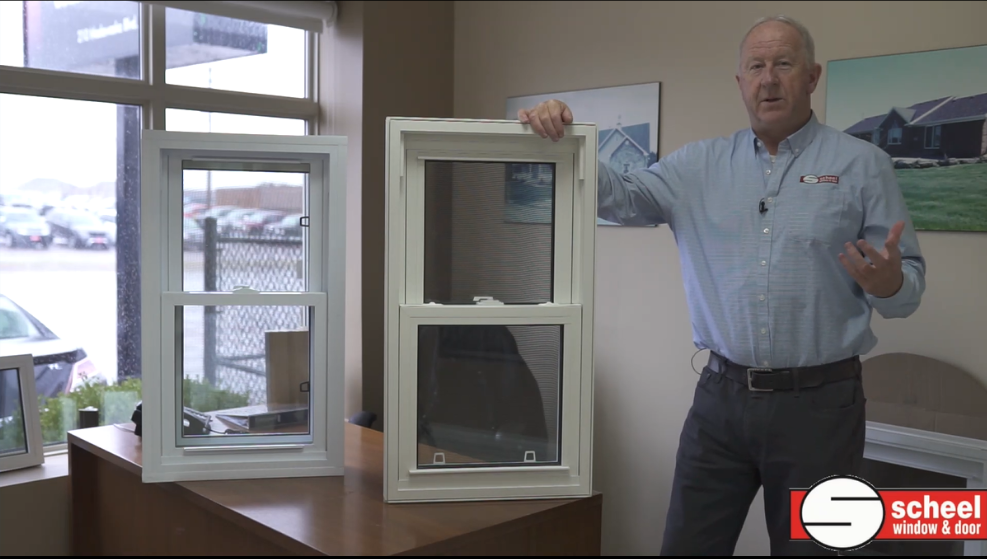 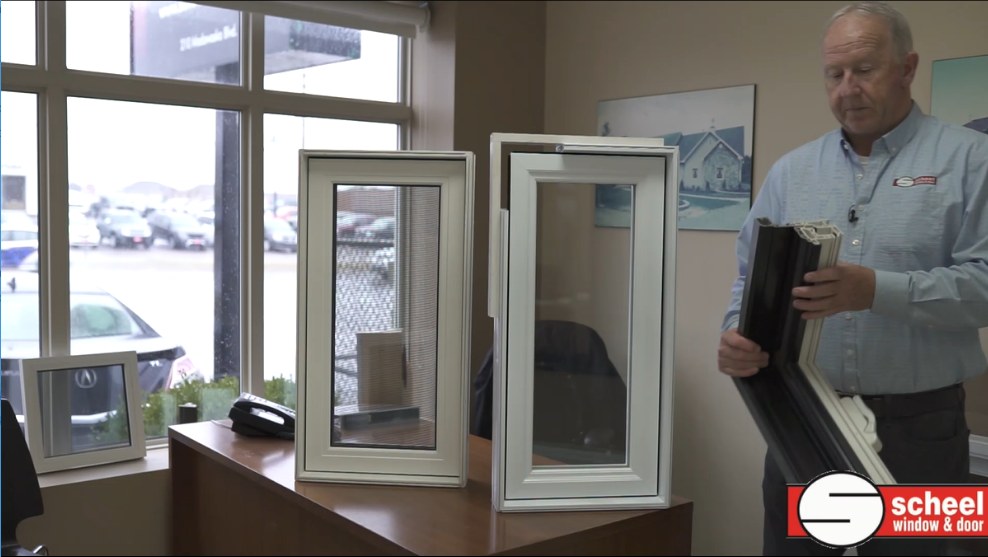 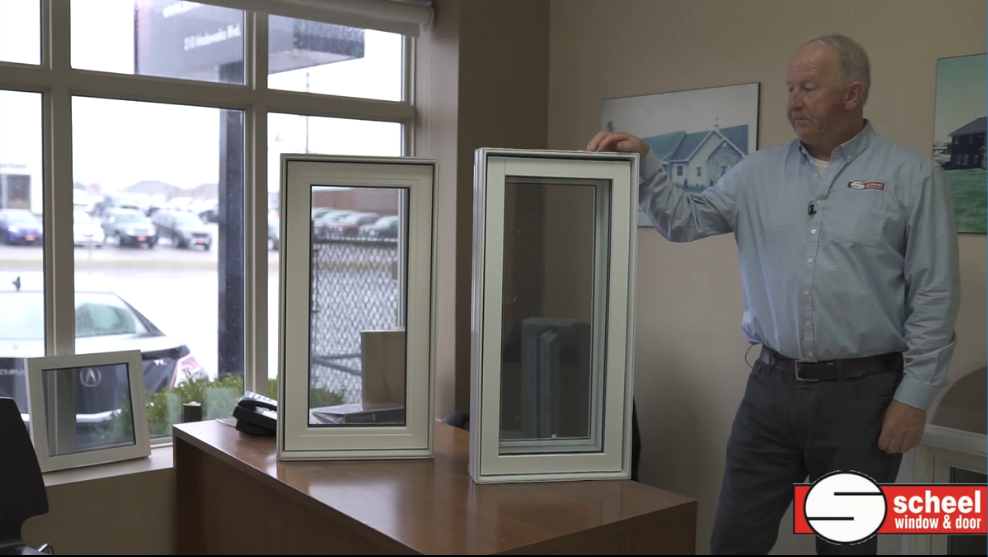 Okay, so let’s debunk some of the myths or some of the mysteries about windows. As you’re probably aware, there’s a multitude of windows available in the marketplace in Ottawa today. Here’re some things as a consumer that you should look for.

First and foremost, color. If you notice this window here, it’s a warm white. This is a product that we manufacture in Arnprior. This will match just about any color in your house including interior trim and that type of stuff, your different wall covers, everything else. If you notice, this window over here, you’ll see that the window’s actually, what we call a blue white, not going to match any interior stuff in your house. Depending on the light, very bluish, but lots of manufacturers call it white. Very important that you actually see the product that you’re going to buy as a consumer. Because somebody is telling you it’s white and you can see right here, there’s a huge discrepancy between the two windows.

Now, there’s also a huge difference in the quality of the products that are being manufactured. Some windows, you can decontent. They all look the same from the exterior, they all have a screen. This is a window that we call a hung unit that goes up and down. Just a vertical window. This window, exactly the same by appearance from the exterior. Look, very, very close except for the color.

Now, again, the part of the windows that everybody doesn’t really get especially if you don’t see, is what the components are in the windows. So, they both have glass. Yes, they have glass. Is there a difference in how they are manufactured? The quality of the extrusion – so the plastic part of the frames, the materials itself, the components, the hardware? Big, big differences in the quality right across the marketplace in Ottawa.

So, I’ll flip this one around. Give you an idea of some of the differences. If we look at this window [inaudible], you can look at operators and hardwares here. Very flimsy, very inexpensive. Very flimsy, very inexpensive. Not aesthetically pleasing at all when you look at it. Look at this window, much more robust hardware system. A better security for a homeowner. Much more ease and aesthetically pleasing on the inside to the eye. No rough cuts. Very well manufactured. Again, something that we manufacture in Arnprior.

To go into further detail on that, this part tilts in. Again, for any hung window for easy cleaning, you can look at this. Look at the weather stripping. It’s a brush type of weather stripping. The hardware that I just mentioned earlier, you can see only through one small wall. Very thin hardware, not very durable. The key with these windows, slide up and down. Friction pads actually hold these windows up and down. If you use them over a number of years, they become sloppy. Again, very cheap way to do it, will not stay up or become difficult to operate. Same thing happens or same thing applies to the top. If you look at the hardware up here, I’m going to tilt this window in again. You’ll be able to look at it, you can see the hardware pretty poor, low quality. Again, low quality fabrication, lots of gaps. And again, nothing really mechanical to hold the window up and down for operating purposes.

So, hung window, going up and down. It does that they say it’s going to do. But is very, very low quality. Again, prominently sold in the Ottawa marketplace but very, very cheap way to manufacture a window.

How we manufacture our products is significantly different. Again, I mentioned the hardware already earlier. Again, the operator is very easy to get to. If you look in the window, there’s actually metal balances. Spring loaded. Very, very durable. Window will last you for years and years and years without any issues at all. If you look at the weather stripping not only is it brushed but it’s got a plastic piece in the middle. Again, to stop air infiltration. Look at the quality of the hardware, a significant difference in the quality of the hardware.

There’s actually manufacturers in town, and we’ll get you a shot of this later, that have string in their windows to hold this sash up and down when it moves. From the outside, you’d never know what was there, but it is there in the window. I mean, we manufacture windows here. We’ve been doing it for 70 years. I can’t imagine making a window with actual string in it so it operates properly. Again, those are just a few differences of the hung windows.

So, let’s talk about a couple of other or do a couple other comparisons here. There’s a window in the Ottawa marketplace now that one other manufacturer’s making. And it’s made of cellular PVC. Which they are purporting to be the latest and greatest in new technology. In fact, cellular PVC has been used in windows for over 30 years. Windsor Windows out of Windsor Ontario has been using it for a number of years. Ostaco is another manufacturer out of Toronto that uses it or attempts to use it and has been doing that for at least 10, 15 years.

But, anyways, let’s talk about the local product. This is that cellular PVC window that they’re talking about. Again, you can look at this product and that product look very similar from the outside. Just a couple of subtle differences – if you look at this window, there’s no seams in the window. It’s actually fusion welded. No opportunity for water moisture, air, anything else. It’s actually a fully sealed unit. If you look at this unit closely, you can see that all the components are kind of pieced together – nothing’s welded, nothing’s fused. They just snapped in place. Why is that important to you? Well, again as a homeowner, this can actually be removed very easily. And potentially, again, from a security standpoint, could be a risk. This cannot be removed, the sash in this window.

I’ll open it up to further demonstrate that. So, if we look at the top of this window again, you can see the plastic hardware, that type of stuff again. But you can see how the window is manufactured and you can see right here, nothing’s been altered. That’s just snapped in place. Water moisture, longevity, durability, probably a question mark for sure. Again, you can see the hardware is not stainless steel even though it looks like it is. The frame, again, that this window is in, this is a very heavy sash. It’s in a frame, as I mentioned earlier, that has very few chambers. I’ll show you that in a later video. This, the hardware again, is anchored in that same frame. I would question the longevity of the window. Also, cellular PVC, you can see here if you look close, that it’s a porous material. So, this is actually on the exterior surface. A laminate that is glued on the window.

Again, this window’s relatively new to the marketplace. No history whatsoever that it’s going to function well. And you can see here, again, if you look closely, that there’s already issues with this window. Again, hasn’t even been installed in a house. So, that’s just basically from manufacturing. And again, if you’re concerned about aesthetics, if you look closely, you can see lots of gaps in the window. There’s not uniformity, it’s not flush. I’m not saying there’s anything wrong with the window. There’s just different qualities of windows out there when you look. So, very important that you do your homework.

Okay, let’s talk a little bit about casement windows now. Casements are the windows that open with cranks. Probably the most popular window by far in the marketplace for a number of reasons. Number one, it’s a good friend of yours from an energy-efficient standpoint. It’s the highest performing window. I’ll show you why that is here in a couple of minutes. But one of the things if you do any research online, you’ll see the most important thing they’ll tell you – Look at the frame of the windows. So that’s why I have one cut in place or cut in half here. If you look at the window, the more number of chambers, the thicker, the number of walls, the warmer, the quieter, the more durable the window is.

Now, there’s companies in town talking about cellular PVC and other things. I’ll get to those in a minute. But, we’ve been manufacturing windows again in Anprior since 1948. These are all energy star certified windows. Very good extrusions. We do them this way because it’s proven reliable, proven durable and again, very, very energy efficient. So, just a couple of things to look at that again, when you’re looking at windows, you should always ask to see whatever product you’re looking at, cut in half. Because again, from the outside, just about every window looks the same. I’ll show you that again when we start looking at a couple of different windows here.

So, as I mentioned previously, significant difference in the color of windows in the Ottawa marketplace.  Very important that you look, touch, see, feel the product that you are going to buy. Because everybody’s going to tell you, their window’s the best, it’s got the best warranty, it’s more durable, it’s more energy efficient – just about every salesman’s gonna tell you that. Is it true? Well, you can be the judge after you see some of the differences in the quality of the products being manufactured.

Again, this is a product that’s available locally in the marketplace. Looks very similar, excepting the color. This window, again, is a casement window – the most popular window in the marketplace. Operator, folding handle, looks as good as anything else in the marketplace. Look at the weather stripping. This is brushed weather stripping, pretty inexpensive. This is what secures the window when it’s closed. Plastic. Okay today, is it going to be okay 10 years, 15 years down the road, 20 years down the road after it’s been exposed to sunlight for a number of years? Who knows.

The hardware, the operating hardware. You can look at the top and look at the bottom, it looks like it’s stainless steel. It’s not stainless steel. Why is that important? Well, you don’t want stuff to rust, you don’t want to have hardware issues. The two biggest things with casement windows are faulty hardware when things go bad and window seals fail. Again, number of reasons that that happens, we’ll talk in detail about that after. But, again, nothing wrong with the window. The window’s actually a window. It’s actually a casement window. Is there a better way to make a window? Can you get more value for your money? Absolutely.

And there’s an example here. So, this window again, cranks open. Very similar-looking. If we look at this, we see metal powder-coated hardware. Not going to crack, not going to fade, not going to become brittle over any period of time. All the hardware in this window is powder-coated. The screws that’ll be used to secure the hardware in the window are stainless steel, will not rust. These are not stainless steel, will rust. Again, plastic, will rust. You can see the weather stripping here – neoprene, rubber. Again, bulbous, neoprene rubber. Bulbous, neoprene. So, three pieces of weather stripping. When this window closes, the wind’s hitting it from the outside, it’s pushing it against the seal. As I mentioned earlier, that creates about the most efficient window, operating window in the marketplace today. Because the winds are actually pushing it tighter against the seal, closing it tighter. That’s a few examples of what the differences are in some of the products available in the marketplace today. 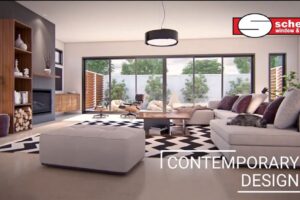 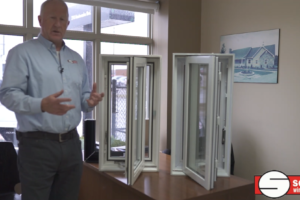 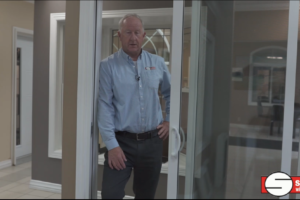 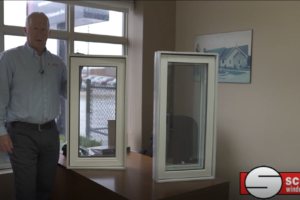